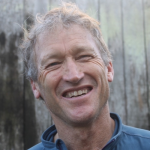 Aid, Evolved
How to Create a Shared Reality with Kevin Starr of Mulago Foundation

What would you do if you had millions of dollars to invest in impact? Would you put it in an existing charity – or would you try to do something different, something better? Kevin Starr needed to answer these questions when, in 1993, he unexpectedly found himself at the head of a new foundation named Mulago. Instead of taking the path well traveled, Kevin decided to experiment with creating impact that lasts. And so, through the twists and turns of many years, he developed the Mulago Foundation fellows program and investment approach.

In today’s conversation, Kevin shares how he found his way in the early years of Mulago. He talks about the challenges of early investments and how those lessons are applied to his current approach. Over time, he shares how the Foundation really started to gel once he was able to build common ground with his investors and his awardees. Kevin dives into some of the fallacies and idiosyncrasies of the aid sector, and how he’s established a more efficient way of working. Mulago runs lean because it builds on talent and trust – and skips the bureaucracy. Finally, Kevin presents his “playbook for scale”, the six systemic accelerators he sees again and again in his most successful investments.

In addition to leading Mulago, Kevin is one of the primary instigators of Big Bang Philanthropy, a group of funders that work together to direct more money to those best at fighting poverty.

If you enjoyed our chat with, you might also enjoy these conversations with forward-thinking funders:

Kevin: I just remember this day, this beautiful bluebird day on the Tibetan Plateau and Everest, and this chain of mountains is in the background, and we are actually standing outside of the Land Cruiser yelling at each other because we can’t find a way to reconcile the sense, his deep, deep sense that this thing works and I ought to see it just from experiencing it.

Kevin: And my sort of desperate need for some numbers that could capture and create a shared reality around what was happening and. And one we actually ended up splitting from, oh, it was very it was actually kind of funny in retrospect, he actually said he got some mad.

He sent a letter to my board sort of terminating the relationship, which made them a little bemused.

But but I realized that not only I really this guy was really important to me and I really cared about him and I realized that that that measuring things actually can be a way of caring for relationships because you need to find a shared reality. And you could see how the fact that we didn’t have anything to really engage on around around filling out a shared reality and our friendship really suffered. And now it’s really important to me that we have these metrics with all these people I admire, so much so that we can understand what’s really going on together. And if it isn’t a fit for us, I can explain exactly why. Because that’s the most that’s the most important, respectful thing I feel like I can do is if if things are aren’t a fit, we have a framework and understanding a way of understanding impact that I can, I can explain and defend and and and fundamentally show respect.

Rowena: Kevin, that is probably the most beautiful description I’ve heard for why we need common metrics in the aid sector. You know, like I’ve been parts of other conversations where people say I need it for my board, I need it for you to say it, I need it for four, you know, because the powers that be require it. But you’re saying, you know, you speak for the foundation, you need that even just so that you and your partner know what you’re shooting for. You know that you’re going for. You’re going for impact. And what does it impact and how are you measuring it? And what that gives you is an ability to step above some of the human relationships that can bog us down. And what I really like about that is, you know, speaking for me personally, like working in the aid sector, there’s lots of good people here. Everyone has the best of intentions. You know, you want to support them. Everyone wants to help each other out. But at the end of the day, that’s not why people have entrusted us with their money. You know, what we’re here for is to fight poverty. And if you have those metrics that you’re fighting towards, then you can hold yourself and your partners accountable. So that’s a really that’s a really moving description. Kevin. I thank you so much for sharing that.

Kevin: Well, I’m just going to kind of segue from that, you know, the kind of at the center is this notion of of impact as a way of keeping relationships, measuring as a way of keeping relationships healthy. But there’s so many reasons to do it. I mean, one is I tell social entrepreneurs to all the time, it’s sort of like you’re throwing your life into this idea. You have the the very least you owe yourself is to know if it’s working. And what you’re accomplishing, and then another is how can you get better at something you’re doing without measuring? You know, we’re everything we do is about iteration, about continually trying to evolve into something better, whether it’s our own foundation or it’s the people we work with. And if you don’t measure things, you just can’t get better at them. And you know, we. We won one of the things that’s so important to us about site visits is to understand the culture of an organization, and we’re looking for a culture of curiosity in a culture where they’re they’re the ones first motivated to measure stuff. And, you know, only of course, you need to do it for funders, et cetera. But too many funders aren’t actually that interested in rigorous impact. And so it needs to start. It really is is is something you do at home first and tell others about second.

Rowena: Right, because once you have that goal and you have progress against that goal, that’s how you build movements. That’s how a team of people, you know, be at the organization or the government or the country can see that there’s something real here and they can invest more in it, you know, maybe at their time or their money or whatever it is so that it picks up the speed that it needs to get going. That’s great.

Kevin this focus on measurement, I know it’s it’s one of a few pillars that have developed for you over the years. You know, now now I think when you look at different investment opportunities, you’re looking for a set of things that will enable that scale journey. Can you talk about some of the other pieces and how it all fits together in your current, in your current search and in your current assessments?

Kevin: Yeah. So one of the so interesting because as we got more and more interested in scalable solutions and really. Even being being focused on trying to take solutions to scale, not organizations, I mean, we sort of started by saying we’re not about projects, we’re about organizations and their ideas. And then increasingly it was about we’re really focused on trying to find scalable solutions and partnering with the organizations that are obsessed with getting those solutions to scale. And as we do that, you realize that, OK, no single organization is going to take something big enough to make a decent sized dent in a big problem. And so we really developed this notion of the doer at scale. And the idea that that you’ve got a good idea now and you start growing it, you start replicating on it and. But what really takes it to its full potential is is others picking it up and replicating themselves, and that there is only there’s only three other doers at scale. There’s either other NGOs or it’s governments or it’s the it’s lots of businesses if you’ve got a for-profit solution. And that’s probably proven the single most important sort of, I don’t know, mental model for scalability because.

Kevin: And then the next one is who’s the payer at scale? Who’s really where’s the money going to come from for this thing to go big? And there you’ve only got a few choices. You’ve got philanthropy, you’ve got taxes, you’ve got Big Aid and you’ve got customers and you had to pick. And we actually have people seriously, we haven’t pick one of each. And that is, yeah, that that they may not turn out their right, but at least they know where they’re headed. And then when you know who you’re and payer are, you can say, Hey, is this thing simple enough for my doer to do? You know, is it simple enough that a government could actually pull it off? And is it cheap enough that the pair would pay because, you know, like a mom is a customer of a cook stove, you can’t design that cook stove to be more expensive than she’s able to pay for. Or similarly, if you have a community health worker model, it’s got to be cheap enough that the finance minister is willing to pay for it. And

Rowena: Although you make it sound so good.

Kevin: Yeah. Well, when you know you’re doing PR. You can ask those most important questions about scalability. Which is simple enough and cheap enough, and then we ask the question, is that big enough? So are there is the overlap of the need and where this thing would work? Is that big enough to be interesting for us and we’re looking for this stuff that could affect, you know, why not hundreds of millions of people ultimately?

Rowena: Absolutely. I love how you paint out the doer in the paper like a checklist, you know, I can imagine it like a scoreboard. You’re going and you’re checking off where exactly you you fit. It sounds so simple. Even if in practice it, it gets quite messy.