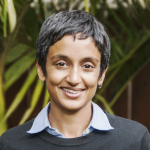 In this interview with Nithya Ramanathan, we unpack the formative experiences which led Nithya to Nexleaf. She talks about the discrimination she faced in high school, and ignored. She shares the complex lessons she learned from building a “simple” well in Bangladesh. And she celebrates the strong individuals who have inspired and guided her along the way.

In the second half of our conversation, we dig into a few trickier topics. For example, what is the role, and the limits, of researchers in international development. We discuss how health data needs to be owned at the country level, even though and especially when aid workers are eager to present this data in the international spotlight. Nithya celebrates what she’s learned through years navigating and supporting government decisions – even when those decisions acted against Nexleaf. And, of course, we talk about how low-cost sensor technology, often referred to as the “Internet of Things”, is changing how healthcare works in the most remote parts of the world.

When the Government Says No

Nithya: One of the people that’s really inspired me in this sector, and has informed so much of what we do, is actually a Ministry of Health person in Tanzania. Dr. Dafrossa. She’s this tower of strength. Everything about her just exudes power.

Rowena: Wow. I need to meet her.

Nithya: She is fantastic. And, you know, whatever space she’s in, you could be having tea with her. You could be in a space with her of global players, power players. She could be running a team meeting. I’ve seen her do all of it and just witness the sheer power that she brings to her decision-making. I have learned so much from her.

One of the things that I’ve read goes – I don’t remember who said this, but essentially – if we’re not stunned by the sheer stupidity of our thinking even a year ago that we’re not learning enough.

Rowena: Oh, man, I love that. I need to start being a little bit more stupid.

Nithya: So, this experience [I’m going to tell you about] is something that I do keep with me, because we are learning so much on this journey – me myself, us at Nexleaf, our team members, but also all of us in the sector.

And I think about Dr. Dafrossa, she is a clear, transparent decision maker. She says what she means. She means what she says. She thinks about the system while she’s making even the most detailed decisions. She knows what she wants and she goes for it.

And so we said, you know, we’ve done this great work in Mozambique and in Kenya with the ministry, we are strong believers that systems have to be led by the ministry and developed and needed by the ministry for the very beginning. And she appreciated our approach.

And she was like, great, glad you think that way.

And by the way, we don’t need that right now.

That’s not where we’re at.

Rowena: Oooh, burn. Oh, man. You must have been crushed!

Nithya: No, I wasn’t. I was just like you are such a fascinating leader, and so inspiring. I’m going to follow you wherever. And so I just kept the conversation going with her, learning from her.

Rowena: Wow. Kudos to you for stepping outside of yourself,

I think a lot of people, when they’re told we don’t need the solution that you’re bringing, particularly after they invest their time and energy and they showed up and they did all this work… They would ask, are you sure? Really somewhere, someone could use this? Maybe over here, over there.

It sounds like you listened to what she had to say, when she said we don’t need the thing that you have right now.

Nithya: Oh, thanks. I think that is one of the most important things that we’ve brought – that I am proud we’ve started to see more of in the sector.You know, it’s like really listening, really focusing on… Finally, yes we’re building, yes we’re doing all this stuff, yes we think it’s important. But really, what is the user need, what are the country’s need. And that is perhaps my most important North Star that I’ve built over the years. It was just about really understanding what is Dr. Dafrossa’s need, and never trying to come to her and convince her, but learning so much from her.

I think it was really four or five years later that she really came to us at that point.

It was like, OK, actually we’re at the point where the country is ready. The country needs this.

“Tell me more about what it is that you guys do again?”

Nithya:  It’s really exciting to follow and get to learn from countries what they need and what they’re building. Because ultimately, what we’re doing is a very small part in a much larger system that countries are building. And the only way that our work is going to scale, I personally believe, is with government.

As much as we all like to criticize, and try to sidestep government, I see that so much in the flows of money and how the sector works and decision making. Finally, at the end of the day, it is their country and that government that has to scale it. And so we are very big believers in following the government.

And I learned a lot of that through Dr. Dafrossa.

And the other thing that I find neat about what happened in that interaction is that there’s something about your work and your persistence, the fact that you had this intervention or you had this piece that you were working on. And it wasn’t right for Tanzania in one year.

So you went somewhere else. You did something else, but you continued in the sector. Nexleaf continued doing this kind of work, until five years later when Tanzania was ready. There’s something about solutions living on through organizations and through people so they can be picked up and applied when they’re needed.

But also that when they’re not they’re not needed, they can still continue somewhere else in the world, doing something else. And that speaks to the importance of living living organizations, living products, living solutions that can adapt to a variety of use cases.

So, wow, I love that your story is about her saying no to you, and then coming back five years later.