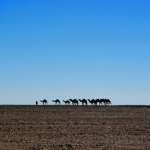 Rosa Akbari is a humanitarian technologist. She deploys digital technologies for crisis response, particularly in the Middle East and North Africa. Most recently she was a Senior Advisor in Technology for Development at Mercy Corps, and before that has worked with organizations such as the International Rescue Committee (IRC), Dimagi, and the United Nations Office for the Coordination of Humanitarian Affairs (UN OCHA).

Our conversation with Rosa is also a case study on the use of digital identities, cash programming, and the interplay of machine interoperability with human trust, in times of crisis. Rosa shares the story of how her family left the Middle East, and how she couldn’t resist going back. We talk about setting up Wi-Fi hotspots in Haiti, digital identities in Iraq, and digital vouchers in the Central African Republic (CAR). We explore the design challenges of working with both low literacy and low numeracy populations. Through this journey, we hear some familiar themes re-emerge, such as the importance of watching, listening, and learning from the local context. And how crucial it is to respect local knowledge and institutions, in order to make change that lasts.